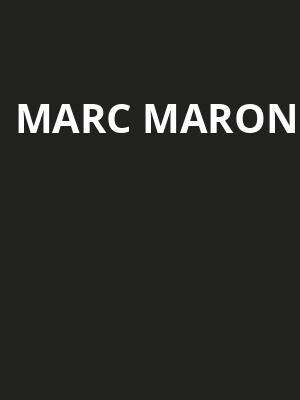 Marc Maron has always been funny. But he was never funny in that way that could be boxed up and stuffed into a brightly lit network sitcom with a laugh track. He was always darker, more cynical and perhaps more of a mess than any comedy could handle.

Marc Maron returns to the road for his first love - standup

The veteran stand-up comic, podcast trailblazer and star of his own eponymous tv show returns to his first love, performing stand up on the huge US home circuit. His WTF podcast has set the standard for every other interview show out there, his signature blend of honesty, insecurity, and resentment and completely candid style always bringing the best out of his guests (or one some occasions their worst). A testament to the impact he's had on the format was the fact that Barak Obama chose to appear on WTF, and opened up about the everyday difficulties of being the most powerful man on the planet at the time.

Sober since 1999, this self-confessed "angry comic" often riffs on his eventful personal life and the stranger side of happenings within the political arena. He may be a bridge-burning, feud-fuelling, tell-it-like-it-is, polarising persona, but its his stubborn rebelliousness is served with a huge side helping of charm, making his brand of comedy exhilarating, refreshing and addictive.

You may be required to have had a COVID vaccine in order to attend this performance or show proof of a negative test. Please contact the venue directly for more information on this.

Sound good to you? Share this page on social media and let your friends know about Marc Maron at Barrymore Theatre.